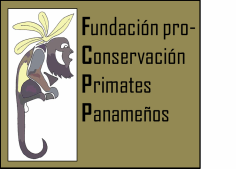 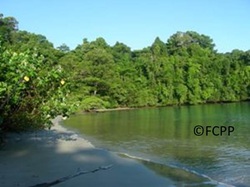 The Coiba howler monkey (Alouatta coibensis coibensis), and the capuchin monkey (Cebus capucinus imitator), are both living at Coiba Island, southwestern Panama, Central America. They are considered Vulnerable and Least Concern respectively by the International Union for Conservation of Nature (IUCN). I carried out population surveys of the two subspecies from May to July 2009 and revisited on May to September 2010. The study covered potential habitats for these primates in the four points of the island. Surveys determined their occurrence and densities in each area. In all, 850 hrs were spent in survey activities. I used two methods: 1) triangulations based on vocalizations; 2) strip-transect censuses. One hundred and nine Coiba howler monkey groups were detected and counted, totaling 472 individuals remaining in the wild with a mean of 4.3 individuals/group (range: 2–5). For the capuchin monkey, 626 individuals in 58 groups with a mean of 10.75 individuals/group (range: 5–16) were detected. Factors related to small group size for howler monkeys on Coiba Island are not known, but could be related to dietary resources throughout the year or seasonally, particularly ripe fruits. For capuchins monkeys, survivorship could be better than for Alouatta due to the wide range diet these monkeys could reach, this include arthropods, coconut and seeds of tea mangrove Pelliciera rhizophora.

The primates of Coiba are not exposed directly to hunting activities but their population needs to be monitored and studied in-depth to better understand their dynamics and behavioral adaptations to this island habitat.